For today’s VOTD (Video Of The Day), I want to highlight the incredible story of Sylvester Stallone and his rise to fame.

This is a guy who in my opinion is a terrible actor BUT an incredible individual who has accomplished things that someone with his background and abilities technically should not have.

“Sly” as his friends call him hit such a low point in his life that he had to sell his dog for $25 because he couldn’t afford to feed him.

I absolutely love pictures like this. When I was 26, totally broke, going nowhere VERY fast, owned two pair of pants that barely fit, shoes that had holes in them and dreams of being successful were as far away as the sun… But I had my dog, BUTKUS, my best friend, my confidant, Who always laughed at my jokes, and put up with my moods, and was the one living thing that loved me for who I was! #man's best friend#BullMastiff #Loyalty #NewYorkCity#AmericanDreams

1971… Since we're on the subject of " man's best friend" this is myself and Butkus as a puppy , we were both , thin , hungry and living in a flophouse above a subway stop, I used to say this apartment had " … Hot and cold running roaches" anyway there was not much to do except spend time with each other and that's where I started to learn the craft of screenwriting. Since I never went out, I relied on his companionship , And actually it was his idea to write Rocky, but don't tell anyone…. Years later when things got even worse I had to sell him for $40 in front of a 7-Eleven store,because I couldn't afford food, then like A modern day miracle, the screenplay for Rocky sold, and I could buy and buy him back, but the new owner knew I was desperate, and charged me $15,000 … He was worth every penny! #New York City #HellsKitchen #BullMastiff #It'sADogsWorld. #MoreToCome#inspiration #ThunderingYourHeart #GoingThedistance

Stallone held out until finally the production company caved and bought his script for $35,000 and allowed him to star in it.

He then immediately tracked down the guy who bought his dog and begged for him back. Eventually the guy caved, sold Sylvester his dog back for $15,000 (remember, he only had $35,000 at the time) and a part in Rocky.

“Rocky”, the iconic story of an underdog boxer, became a hit and earned the Oscar for Best Picture, launching Stallone to stardom.

His dog also starred in the movie.

These are just a few of the incredible moments in Sly’s life and show his grit, resolve and most importantly his refusal to settle for anything less than goals.

The man demanded results to happen as he wanted them to.

Sly has gone on to impact hundreds of millions of lives and lived life on his terms.

Regardless of what I think of his ability to act, his story is incredible.

Here is Tony Robbins recounting Sly’s story as told to him by Sylvester himself.

Next is a Video 1 of 4 where Sylvester himself goes over the story of how Rocky was made.

I hope enjoy today’s VOTD and I can’t wait to see the impact you have on the world! 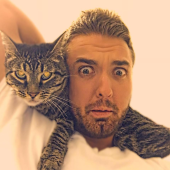 Gabriel Bryan is a lifelong "hacker of things". Never content with "it can't be done" or "we don't do it like that", Gabe is constantly testing the limits of what is possible and not possible. After many, MANY failed experiments, he brings his knowledge here to SuperHumanMinimalist.com to share with the the SHM community.

VOTD: Bleed for This